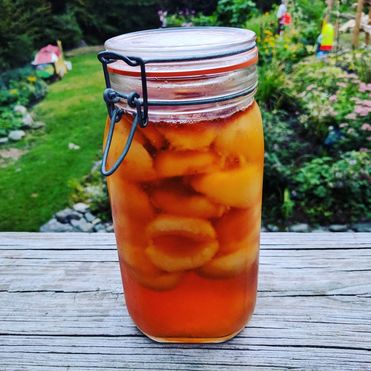 Our peach tree nearly toppled over with the weight of its fruit a few years ago. Which was a big surprise, as I recall our disbelief at the point of its purchase that one could even grow peaches in Vermont.

Peaches have a special place in our hearts. We spent part of our childhoods in the eastern panhandle of West Virginia. My brothers and I had a babysitter named Linda. She had a homestead way out in Harper’s Ferry, where she raised a gaggle of kind, wild boys. Linda kept to the house unless someone needed her but us kids had free reign of the farm. And the peaches. The kind you can barely eat for juiciness. The kind that gets all over your face no matter how tidy you’re trying to be. We had peaches many ways at Linda’s. But one of the best, on a hot day, was frozen and blended with a little water. Linda called it the peach freeze. It was the taste of summer.

And then there were Grandma Jeanette’s canned peaches. Served for dessert whenever we were in Aberdeen, South Dakota. Perfect halves, flawlessly skinned, in heavy syrup, preserved in half-gallon mason jars. Grandpa Stan fetched them from the cellar slowly and carefully while we anticipated. Brought the prairie summer to any time of the year, over the years, first for my husband, then for us both, and then for our children.

So we picked our first harvest of peaches that year – every last one of them – eating some while still warm from the sun. They weren’t quite the West Virginia peaches or South Dakota peaches of our youth. But they were fresh. And just crying out to be canned in a little of our homemade maple syrup.

And that’s what we’ve done, year after year, with our own peaches, or, in years of lean harvest, with the Pennsylvania peaches available by the crate at our local coop, or, this year, the peaches we brought back from a road trip to the deep south. In fact, it has become a bit of an Independence Day ritual. Bringing a little Vermont to the peach. Expressing solidarity with peach country. Sending a bit of sweetness south and west, into the past, and into the future. And hoping someone remembers these peaches fondly enough someday to pass them on.