Did you know? You can make maple syrup from any tree in the maple family that is 10 inches in diameter at chest height! So, grab a tape measure and some marking tape, and take a moment for identifying maple trees. You’ll be glad you did.

We make maple syrup with mostly red maples. The sugar content of the sap is lower than with sugar maples. That means it takes a bit more work to boil down to syrup, but the syrup tastes just the same. And reds are what we have near the house. So we use them.

Red maples are also called “swamp maples.” They live in swamps, bottomlands and uplands in moist soils. Red maples are hearty trees that grow to 50-70 feet tall. Presumably, red maples get their name either from the scarlet color they turn in the fall, the color of the flowers and winged seeds they produce in the springtime, or both.

Red maples will tolerate a wider range of conditions than the sugar maple, including variations in the climate. So, even for us amateur makers, it’s worth knowing your reds, even if you have plenty of sugars.

Science suggests they will fare well despite our warming climate. So, as it happens, for us, at least, there’s a little good news to take with the bad.

Red maple leaves are from 2 to 6 inches wide. They tend to look 3 lobed rather than 5 lobed (lobes are the sections of the leaf), although technical definitions allow for both. And they have a saw-toothed, jagged edge to them with not a smooth curve anywhere.

Red maples are some of the earliest trees to bud, flower, and drop seeds in spring. The color of the buds, flowers and u-shaped, winged seed pairs of a red maple are . . . you guessed it: red! In early spring, look for a red haze as the buds develop. Later, you may notice the red flowers littering the ground under the tree. Finally come the seed: at this time of the year, brown, pairless and scattered on the ground. 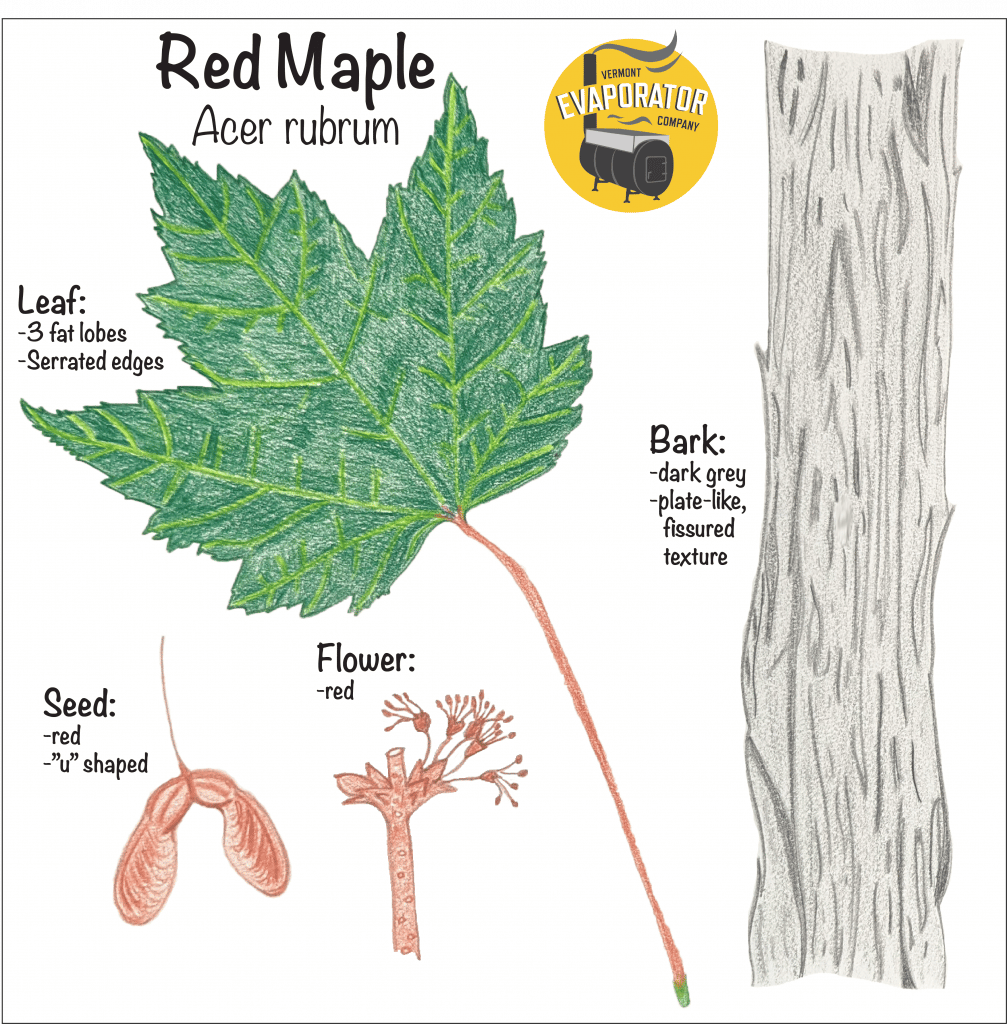 Sugar maple are 3-5 inches wide and have 5 lobes, with a smooth, curved edge where the leaf of the red maple is jagged. In the fall, sugar maples are likely to look multicolored, showing green as well as hints of yellow, orange and/or red as their chlorophyll recedes.

In the spring and summer, a sugar maple buds out later than the red maple. It’s flowers are chartreuse, and its winged seed pairs are large and green, although also u-shaped. So if you’re thinking about sugaring next spring, don’t underestimate the value of taking a short stroll through your woods to map out your sugar stand, now. Before you know it, those leaves will be falling!
Be with the trees, everyone! And be well.