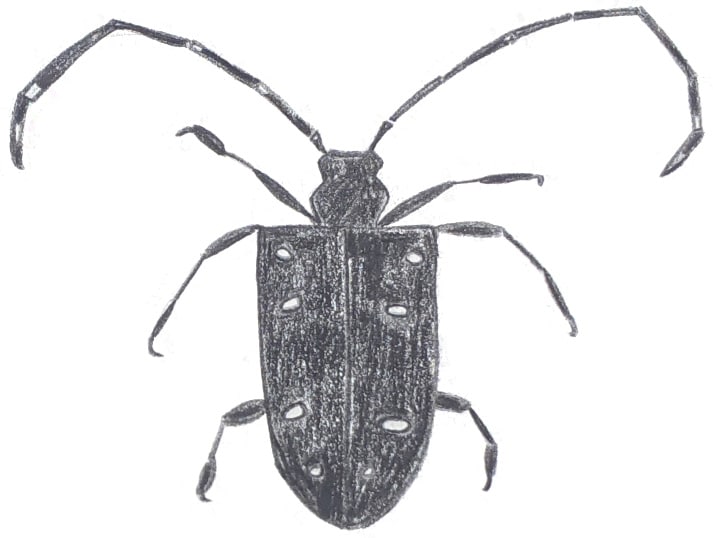 What could be a better warm-weather, maple-related blogpost than the bug-villains of the sugarbush?  We’re talking about the creepy crawlers that keep the maple industry up at night. Specifically, six notorious pests of maple!

I had the pleasure of interviewing Nancy Patch, County Forester for Franklin and Grand Isle Counties here in Vermont the other day. Knowing pretty much everything about trees and the forests they live in is Nancy’s job. And, here in Vermont, where maple is big business, Nancy is at the forefront when it comes to all-things-maple-trees.

Recently, though, it was the threat that these six tiny pests present to our woods that formed the basis of our conversation. Here’s who those pests are, the threat they pose to our sugar woods, and what we can do to help! Believe it or not, earthworms are not native to most of North America. (Scientists believe that the ice age killed off any earthworms that may have lived here more than 10,000 years ago.) Worms were reintroduced with European colonists, who used dirt to ballast cargo ships. These ships arrived here otherwise empty and left chock-a-block full of precious natural resources. Worms have worked out great for our farms and gardens, but they are a disaster for woods. In the woods, they destroy the soil biota, a major disruption to the forest ecology. (Worms have also been known to devour sugar maple seedlings, pulling them right under ground. Yikes!)

The problem with worms, unsurprisingly, is particularly acute in forests that have previously been farmland. It is also a major problem in heavily fished woodland areas. There are a lot of these areas in Michigan, for example. And in Maine, as well, where Nancy reports that the state has responded by actively discouraging fishing with live bait.

What can we do about this repeat offender with the long rap sheet? Consider not fishing with live bait, or at least refraining from dumping unused bait streamside. Instead, dump unused bait in your compost or garden. Beyond that, says Nancy, allow the woods you own to build up organic matter and reconstitute that soil biota. How do you do that? Let dead trees rot on the ground and leave the leaves in the forest. Easy! (To learn more about some particularly good-for-nothing earthworms, check out the Jumping Worm and the Crazy Snake Worm.)

Asian Longhorn Beetle: a bad ‘un that we’ve managed to keep under wraps.

This one you’ve probably heard about, because this notorious pest of maple has been in the news. The Asian longhorn beetle will eat anything, but, like us humans, has a sweet tooth and prefers trees in the maple family (Norway, red, silver, sugar, sycamore maple and boxelder). Let loose in the wild, the Asian longhorn beetle could prove disastrous for our sugar woods. Thankfully, Nancy reports that we’ve been vigilant, and gotten lucky. Infestations of the Asian longhorn beetle have only been found in urban areas. This could be because of their suspected origin: wooden shipping pallets from Asia – now outlawed. And we’ve also been very good at eradicating infestations where found. The latest was in an urban woodland in western Massachusetts.

For now, this notorious pest of maple appears to be safely behind bars. We can rely on people like Nancy to sound the alarm bells if there’s a prison break, though. (For more about the Asian longhorn beetle, you can visit the Vermont Invasives website.) Why does this matter to the sugar maple and the industry it supports? Ash are some of the most efficient nutrient cyclers of our forest, says Nancy. This means that these trees put more nutrients like calcium and magnesium into their leaves than other trees. When the leaves fall in autumn a forest that has a good number of ash has richer soil as a result. All trees need nutrients like magnesium and calcium. But sugar maples are high maintenance and picky – in eating as well as with soil moisture, drainage, and temperature. (Sheesh.)

What can we do? According to Nancy, there’s no containing this serial-killing bug. So, unless it looks sick and might fall on your house, there’s no need to preemptively cut down all your ash trees. In fact, this would be counterproductive. That’s because those 2% of ash trees that will survive this pest will do so because of their genetics, which they will pass on to their progeny through their seed. If we cut down ash preemptively, we will increase the likelihood that ash trees disappear entirely. Otherwise, we can expect 2% of our ash to survive, and continue to thrive.

So, leave at least some of your ash standing, says Nancy! Especially your big, seed-producing ash trees. You could be the lucky owner of a stand of related trees with a genetic marker that resists the emerald ash borer! (For more information on the emerald ash borer visit Vermont Invasives.) Sugar Maple Borer: the name is the scariest part.

The Sugar Maple Borer is also a long-horned beetle, but this one is native. And, despite its scary name, it only attacks sugar maple trees that are already under stress. This notorious pest of maple is an opportunist. It attacks sugar maples that may already be struggling to thrive because they are in a woods with soils compacted by grazing. Or because they are in the understory of a dense woods where they don’t get any sunlight. The other thing to know about the sugar maple borer is that the wounds caused by the pests aren’t as bad as some others. Even a tree that only gets some sunlight can survive with a sugar maple borer wound for a long time.

What to do? Not much, says Nancy. In a healthy woods, this notorious pest of maple is no biggie. If doing improvement work in your woods, it is a good idea to cut an infected sugar maple to stop the spread of the pest. But, save for that, it’s ok to sit tight on this one and let those victimless misdemeanors roll.

Known well amongst professional sugar makers, this native, notorious pest of maple will strike in any one location about every 40 years. In Vermont, that means every 10 years, it’s somewhere. This pest is a big eater, and will defoliate an oak, aspen, or sugar maple any day, a beech or yellow birch to survive, but never a red maple. According to Nancy, that’s what makes this pest the poster-pest for keeping a diverse sugar woods. The more you can mix their preferred food with stuff the caterpillar can’t or doesn’t prefer to eat the less likely you have a major infestation.

What to do? While Nancy sometimes recommends carefully applied bacteria that eats the caterpillar to professional sugar makers, this is because their livelihoods hang in the balance. For us hobbyists, it is enough to do the things that generally support forest health. (For more on the forest tent caterpillar, visit the Vermont Agency of Natural Resources.) And take a year off from tapping any tree that’s been defoliated by the forest tent caterpillar. Formerly known as the gypsy moth, this non-native, notorious pest of maple is also a defoliator (it eats leaves). It prefers oak, but also feeds on aspen, maple and pine. It’s an early-season defoliator, so trees get a second shot at putting out leaves after attacked. But most trees can only do this for 1 or 2 years and survive. Three years of suboptimal foliation will cause dieback and may kill a tree.

What to do? Best practice is for homeowners to take a year off from tapping a tree that’s been attacked by the spongey moth. (For more information about the spongey moth, visit Vermont Invasives.)

And that’s a wrap!